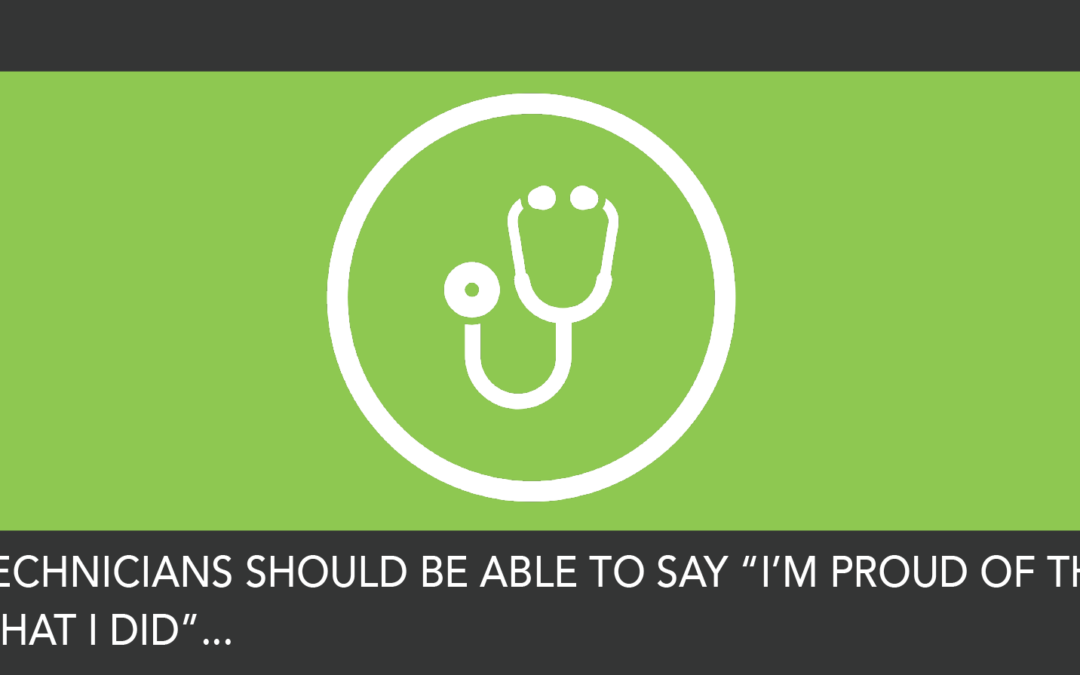 I used to work in a gynecologist’s office, and now I work at The New Flat Rate.  I know, I know…I’ve worked to help two TOTALLY different kinds of plumbers!  It seems like a haphazard transition, but believe it or not, there’s more overlap than you would think.

I won’t go into the gory details of each job—I’ll leave that to your imagination.  However, there are some key concepts that remain important whether working as a doctor or as a technician in the trades, and let’s be honest; to be a customer of either of those occupations is a pretty vulnerable place to be in.

One of our objectives is for your customers to choose above the Band-Aid option at least 80% of the time.  If you aren’t seeing those results, we recommend you start by examining these three areas:  the script, mastering your concern, and confidence.

First, that dreaded script.  So boring, right?  We have forced you into a box and won’t let your dazzling personality shine.  We often get the question, “Does it have to be word for word?”  In short, we always strive to practice to perfection.  In reality, the script is just a few sentences and has been condensed down to something that everyone can do.  It started out much longer, but over time and with lots of testing, we have taken out the fillers, so every word left behind is an active ingredient in eliminating sales resistance and eliminating objections.

Imagine the “script” at a doctor’s office and what could happen if parts get left out or changed even a little bit.  You check in, you sign your HIPAA paperwork, you get taken back by a nurse to check your vitals, you might leave behind some samples for the lab, your entire health history is taken, they ask about your medications, and THEN the doctor examines you and diagnoses you and then tells you your treatment plan.  Imagine the disaster that could happen without proper execution of that “script.”  Let’s just say the nurse forgets to check your temperature and you actually have a fever; that impacts the rest of the visit.  Maybe just to throw in her personality, the nurse avoids asking you what medications you are taking so you aren’t embarrassed, and later you are prescribed something that can’t mix with one of your current medications.  Let’s say the doctor doesn’t follow the script of handwashing before and after touching you and causes a horrible infection.

Sure, leaving out some of the words in TNFR scripts won’t cause death or a malpractice lawsuit, but it could dramatically impact your interaction with your customer.  If you aren’t seeing that 80% above the Band-Aid, step one is to check the consistent and accurate use of the scripts.  If techs are changing words, which words do they change, and are they words that are contributing to objections?  The script builds a healthy foundation for TNFR’s coaching and training, and all other scripts pull from that.  One TNFR member said, “If I follow it word for word, 9 out of 10 take a higher option (than the Band-Aid).”  We are looking to make 90% of calls super easy; of course, we will always have some customers who have questions or complaints, but this makes it so the majority of our calls flow; gynecology and plumbing pun intended.

Second is mastering your concern; this is like that “bedside manner” that doctors have to develop if they want to keep patients.  When selecting a page, the tech has to be able to answer “why,” “what,” and “when.”  If we are working on a capacitor on an A/C unit, it is operating outside of manufacturer specifications.  The “what, why, and when” justifies why you are about to talk to them about a repair; it is hard to raise the inconvenience and build the drive to want to do it if the tech doesn’t address these points.  When a customer asks what happens if they don’t proceed with a repair, depending on the situation, the technician will explain that it could get worse in the upcoming season, it could cause additional failures, and it could create health and safety concerns for your family.

These are NOT scare tactics; it is simply to make sure the customer has the information they need to know and that it is important to take care of it.  To answer the “when”—we want to take care of it now so it doesn’t get worse or cause additional problems, and we use empathy to communicate severity.  It’s vital to show we care about their livelihood, their family, and the health and safety of their home.  “(Customer Name), do you have a minute?  I checked out what’s going on, and I’ve got to tell you, I’m a little concerned.  I checked out your air conditioning, and I actually found a fault in the voltage absorption system.  It’s operating outside of the manufacturer’s specifications, and honestly, it looks like it could fail and cause additional failures in the coming season, and you know what?  Your family’s safety is important to me…but don’t worry, I have some options to take care of it…would you like to see them?”

This is the same as a doctor expressing the details of a diagnosis, the options for treatment (medication, surgery, etc.), and the consequences if the patient doesn’t proceed with one of the treatment options—the overall prognosis.  The “what, when, and why.”

Third, confidence is key, but some techs aren’t great communicators and aren’t super savvy.  Consider again the concept of being the doctor.  When a doctor walks in to the room, he or she isn’t usually going to tell you it is their first time sticking a needle in someone.  The doctor’s confidence allows you to feel comfortable even though every doctor started out new at some point.  As a doctor would convey their highest recommended treatment option, the menu and script allow you to convey the value and that the Platinum is the most important option which lets you do the most for them.  You have to convey the fact that you can solve the customer’s problem no matter what they having going on; you have the ability and the connections and the know-how, and before you leave, you will have a solution for them.  The top option should convey a level of confidence that allows the customer to know that the top option is the best option for them.  By the way, that script allows you to portray more confidence; you know exactly what you should say and exactly what happens next so you can take time to listen to your patients…err…customers without bumbling through a call.  There is never a time that the top option isn’t the best because it allows you to do your best.  It’s just like prescribing a medication to treat symptoms versus actually performing a surgery and taking care of the problem permanently.  The permanent option, though more costly, saves a whole lot of problems (and money) down the line.

Your techs should be able to say three things after each job: “I’m proud of the work that I did, I wouldn’t have done the work any differently, and the customer got their money’s worth.”  As long as all of those can be built into every single service call, the techs will start believing that they can go above and beyond and build a better craftsman style.  The word will get out about your company that it’s worth it.

I’m no doctor, though “Doc Zock” does have a nice ring to it, but the treatment plan if you don’t have 80% above the Band-Aid is to check your script (no, not your Rx script), master your concerns, and have confidence.  Follow these and watch your symptoms disappear.  Doctor’s orders.